Sept. 18, 2019
The United Kingdom as a model for a natural-gas-based transition 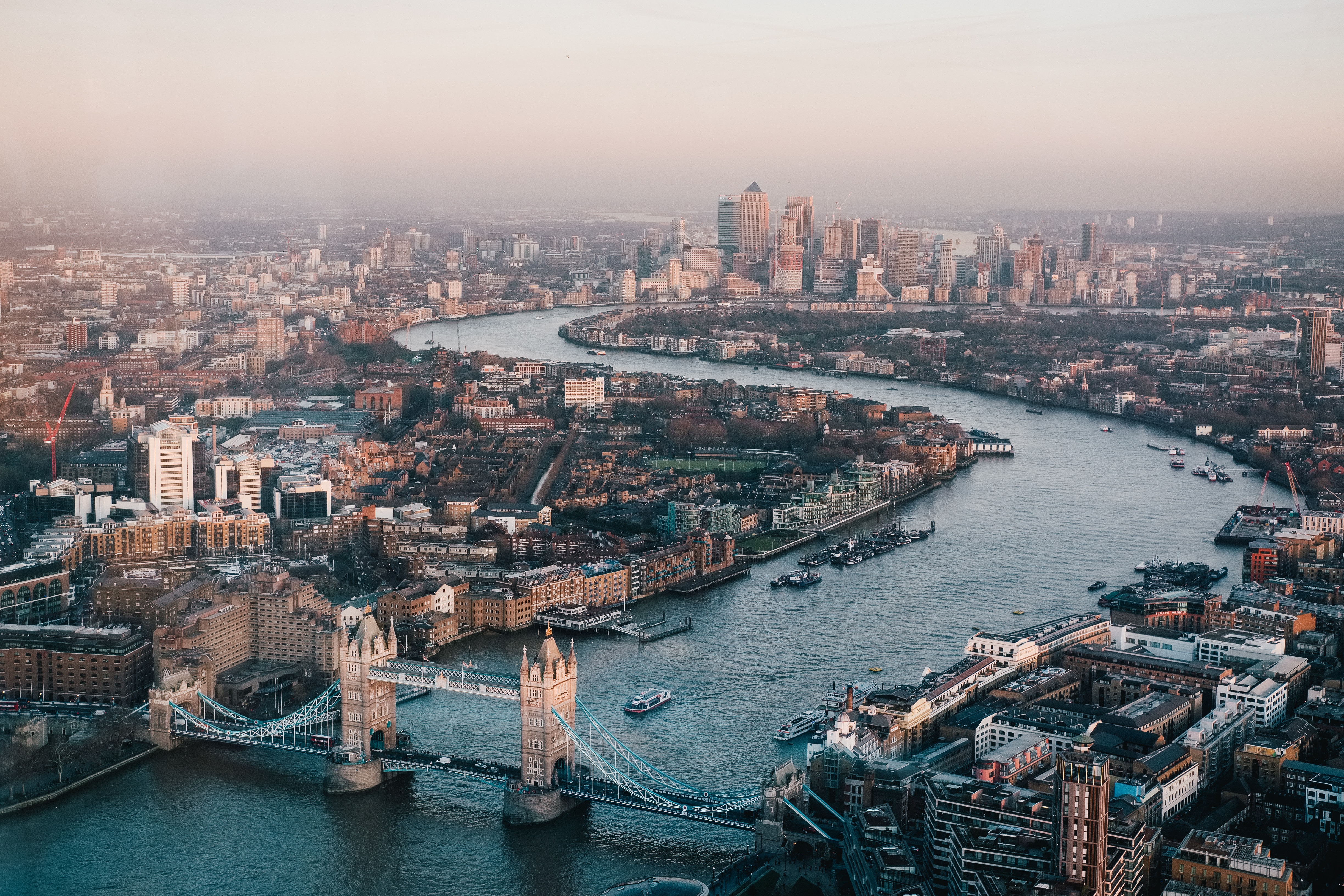 In the context of the Énergie Saguenay Project, the United Kingdom’s national energy policy offers a convincing example of the role played by natural gas in the energy transition processes of several European and Asian countries.

In the recently-published Fifth Edition of its G7 Coal Scorecard Report, the global independent climate change think tank EG3 (1) named the UK as the G7 country where the role of coal in electricity generation has shown the most dramatic decline in recent years, falling from some 40% in 2012 to about 5% in 2018.

This reduction was supported by an increased reliance on natural gas and the development of renewable energy sources (2).

The contribution of natural gas enabled the UK to accelerate the development of 100% renewable energies, including wind energy, which now supplies 19% of the electricity consumed in this country (4). Thus in 2019, for the first time since the Industrial Revolution of the 19th century, the UK has more electricity produced from renewal sources than from fossil fuels.

Germany is also a key country to keep an eye on when it comes to energy transition, as it is in the process of phasing out both nuclear and coal-based energy. The country has committed to a complete phase-out of coal by 2038, a goal in which the development of renewables, supported by reliable, secure and uninterrupted energy sources, such as natural gas, will play a huge role.

Thus in 2018, although coal provided around 40% of the electricity consumed in Germany, for the first time in its history the country produced more electricity from 100% renewable sources than from this polluting fossil fuel with higher GHG emissions (5).

Coal and the G7

Currently, in 2019, coal remains a major source of electricity in G7 countries.

But thanks to the accelerated development of renewable energies and the judicious use of sources with lower GHG emissions and pollutants, such as natural gas, the demand for coal in this group of industrialized countries is on the decrease, driven in part by ambitious public policies on energy transition.

This is also the conclusion of EG3’s report.

The report, available here , has especially high praise for Canada and the United Kingdom, two countries that have adopted clear measures to phase out coal from their energy mix.

According to EG3’s Scorecard, G7 countries currently have 380 GW of operational coal capacity, two-thirds of which is in the USA. However, the report notes that four countries, i.e. Canada, France, Italy and the UK, have committed to a complete phase-out of coal by 2030 (7).

As the graph below illustrates, coal consumption for electricity generation is declining in six of the seven G7 countries – all except Japan, where the accelerated phase-out of nuclear power creates special challenges, which we will discuss in a future blog. 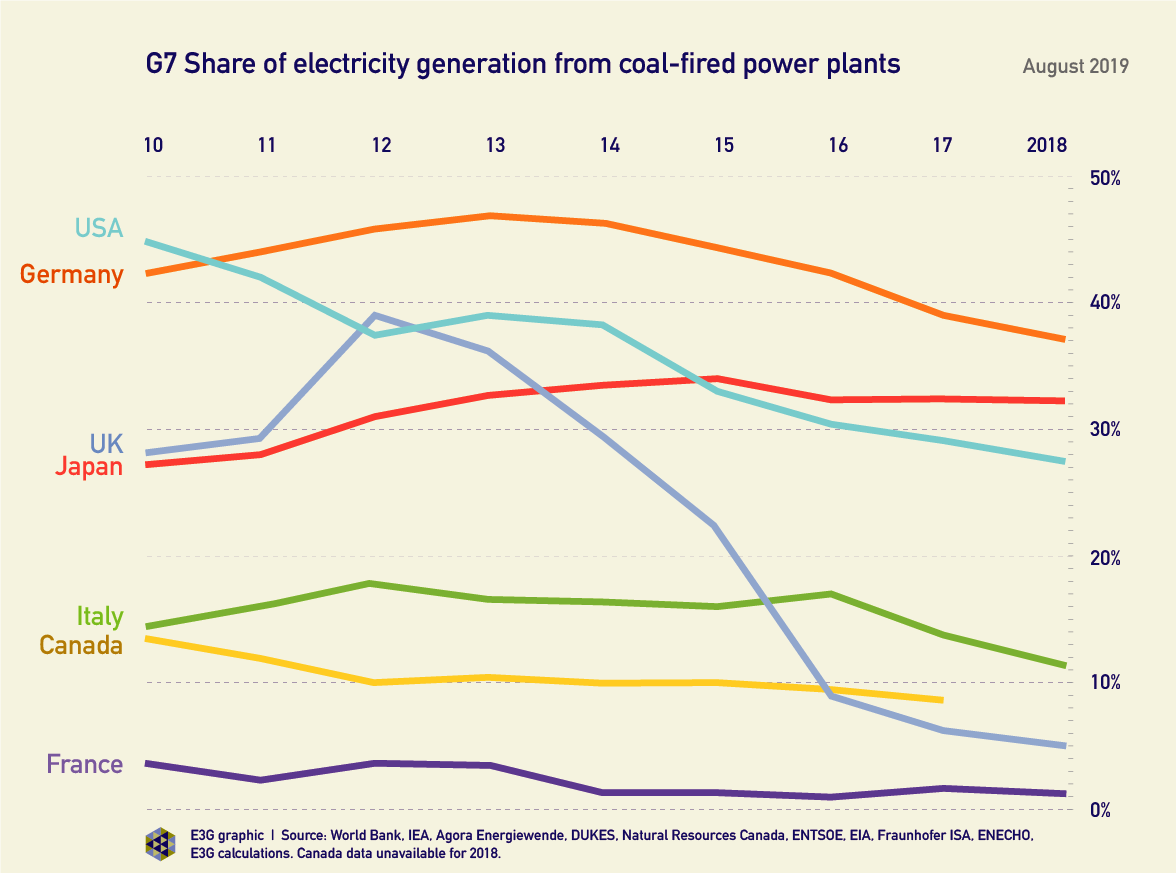 Canada leading in the exit of coal

Thanks to its vast territory and multiple resources, including hydroelectricity, Canada is fortunate in that it does not have a significant need for coal in its energy mix. Still, in 2017, 9 % of the electricity produced in Canada was generated using coal, representing a 40% decrease in net tons consumed compared to 10 years earlier (8).

In 2018, Canada produced 62 million tons of coal, 49% of which was destined for industrial uses, including metallurgy.

The Government of Canada made a formal commitment in 2018 to ban coal-fired electricity generation as of 2030. This has resulted in the adoption of concrete measures and support programs to ensure that these objectives are met.

Because of this official commitment, and the important role played by Canada, alongside the UK, in the work of an international group dedicated to ending the use of coal in electricity generation, the Powering Past Coal Alliance (9) the EG3 think tank’s latest report describes Canada as the world leader in the fight against this energy source.